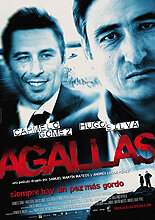 Sebastián, a small time crook who just got out of prison, decides to look for a job in the small company, “Isolina, Sea Products”. Evidentally, it's not what he wants to do in life, but something tells him that the owner of the company, Regueira, hasn´t bought his Jaguar just selling sea food. Thanks to a trick, he gets to meet the manager of the factory, Raúl, and gets hired. Soon he obtains the information he needs from Raúl: the frozen fish are just a cover for a highly lucrative business. After this, Sebas kills Raúl and tells Reguiera he did it because “he had no choice”: that delivery of cuttlefish stuffed with cocaine where about to end up in the city of Vigo´s police station. Regueira doesn´t believe this completely, but he soon discoversthat this young guy with half of his teeth gone has guts, and so he decides to name him his assistant. Gradually, Sebas changes his looks, gets new clothes, new teeth, and gains his boss´ confidence. When Regueira eliminates his right hand, Antonio, Sebastián takes his place. Now he seems to have reached the peak - or almost. But Sebastián, so smart and ruthless, ignores he´s part of a bigger game, far too big for him.